Worried about the health of your teeth? Put that candy bar down! Now pick it back up. And eat it! 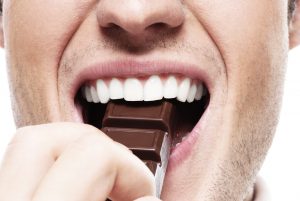 A recent study has shown that chocolate can actually protect your teeth from decay and mouth bacteria. The study which was carried out in Japan, shows that a part of the husk of the cocoa bean has the same effect of an anti-bacterial. The bean was proven to protect against plaque and other substances that damage teeth. Although most of the helpful husk is done away with in the production of chocolate goods, the study showed that chocolate was still considerably better for teeth than other sugary sweets. Although chocolate is often mixed with a lot of sugar, the antibacterial agent that survives production works to counteract it.

The study tested groups of rats. One group of rats was given water mixed with a cocoa bean husk extract. The other group was fed a high-sugar diet. After following these diets for three months the teeth of the rats was examined. The rats who did not have the cocoa bean husk had twice as many cavities as the group that did.

Scientists who helped in the study are brainstorming ways to incorporate the cocoa bean husk (CBH) into human dental regimens. Some possibilities include adding CBH extract to either a toothpaste or mouthwash. It can be as simple as incorporating more of the natural husk back into the processed, sweet chocolates we all love.

Although the study’s results are exciting, participating dentists do not recommend upping your chocolate intake. Processed chocolate is still full of sugars that don’t aid in dental health at all.

Visit your dentist regularly and limit your sweet intake to during mealtime, after which you should brush. Call Dr. Arzegar to set up an appointment today to check for early signs of tooth decay or plaque buildup!